The Yewfield garden and meadows are full of colour right now. It is the pink and purple moment in the garden with red campion, meadow rue, plume thistle, the first old fashioned roses and peony taking the stage front and centre. In the wildfower meadows northern marsh orchid, red clover and self heal steal the show. Gardens and meadows have these colour moments that must be enjoyed to the full because they quickly pass. Already the bright yellows of rough hawkbit, cat’s ear, yellow rattle and bird’s foot trefoil are becoming the dominant colour in the meadows. Also nice in a different way. In the patio it is time to ring the changes and pull out most of the red campion as it is rapidly going to seed and replace it with some summer perennials such as monarda and rubeckia for summer colour. Gardening is a satisfying but demanding occupation in June if you want to keep the show on the road and create those colour moments. 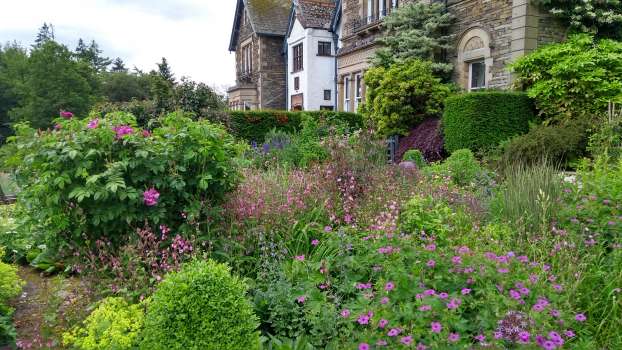 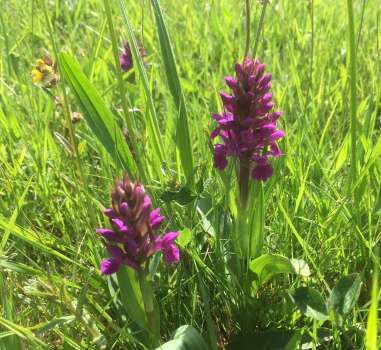 The more flowers there are, the more bees and other pollinators will grace our gardens. Our three hives of bees have been having a bountiful June. The so called ‘June gap’ can stall honey making if there is an overly dry or wet June. A full hive of bees lacking enough forage in June to feed all their young is always a concern for beekeepers. Last year I had to feed our bees in June but not this year. Because of the late spring merging quickly into summer forage, with wild raspberry, bramble and lime blossom and mostly dry warm weather, there will be no gap this June.

We had the pleasure of welcoming 43 children and staff from the local primary school to do a tour of our gardens, meadows and forests. Their theme was conservation so we had much to show them. Nature is the best teacher and the abundance of colour and diversity around the place made an impression. Hopefully a deep impression. There were some great questions such as ‘Why do you like nature?’, ‘What should we do for nature’? ‘How do you learn about nature?’. It is heartening to see the next generation so interested in furthering their relationship with nature. They say the best time to instill a love for nature in a child is up to the age of nine or ten. Of course there are teenage exceptions. Think of the excellent work being done by Dara McAnulty in Northern Ireland to get teenagers interested in the natural world. 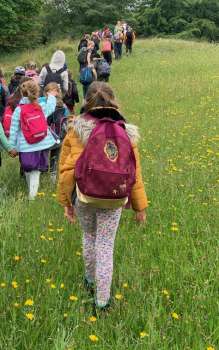 Five swifts screamed past my window and it lifts my heart to hear them. We have observed three nesting sites in the house which is great news. They are faithful to nest sites but the other day we saw them exploring a new site on the west side of the house which we hope they find suitable. Although the swifts are great news we haven't seen any swallows here at Yewfield this year and is it a proper summer without swallows? Various theories are out there as to why there are so few this year: a dry period through Europe in March and April when migrating, fewer insects to feed on, high winds and continued trapping in Mediterranean countries in spite of it being illegal now. Their joyful chatter and arial antics are sorely missed.

We are in the process of applying for the All England Woodland Resilience Award for 2021. The award we are applying for is 'Adaptive management in combating climate change'. After the tragedy of larch disease in our forest we have replanted with 7000 mostly native trees following the guidelines of John Rodwell's 'Creating New Native Woodlands'. The role of forests in combating climate change is crucial and we at Yewfield want to do our bit. Recent research shows that planting a mix of some conifers and mostly native broadleaves are the most efficient and long term way of sequestering carbon. By planting lots of native trees and shrubs it will in time be an important habitat for biodiversity as well. As many are now saying, we can't deal with climate change without dealing with our biodiversity crisis at the same time as they are intimately connected.

A book that illustrates this beautifully is Suzanne Simard's book ' Finding the Mother Tree'. She is the lady that has been studying the relationship of underground fungi working in symbiosis with tree roots. Her extensive peer reviewed research is still not widely recognized by commercial forestry interests. How can we do forestry differently is the question that emerges from her findings. She has shown that one half of a tree's carbon is stored underground and clear cutting is the most destructive practice for carbon release. She advocates selective felling with groups of trees retained at fifteen metre spacing to enable mychorriza relationships and natural regeneration. Her research in Canada is finding the best prescription for harvesting forests that makes sense commercially as well as for climate change and biodiversity. If any of you have read Richard Power's novel 'The Overstory' he portraits Simard's work in the character of Patricia Westerfield. Our forests are more than just a collection of trees. 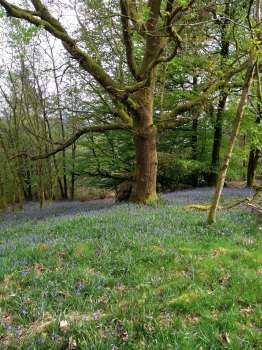