In spite of experiencing yet another ‘one in a hundred year flood event’ here in Cumbria (the last one was 6 yrs ago) we have gotten off lightly at Yewfield. Thirteen inches of rain fell in 24 hours on the mountains of the Lake District last weekend but the house is wisely positioned up on the side of the hill overlooking the Vale of Esthwaite with no streams nearby. Drains had to be kept clear of leaves to direct water around the house but looking into the vale and watching the news our hearts went out to those in the locality living alongside overflowing rivers and becks. A few trees came down in the wood above the house and across the track in the plantation but that is the extent of the damage here. 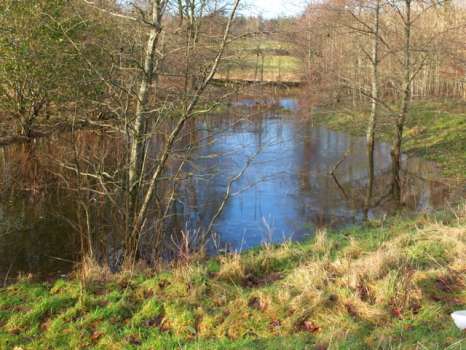 It is yet another wake up call that we need to reassess the way we manage the uplands. To mitigate against flood damage it seems to me that we need to slow the water down entering the valley watercourses so that it has time to get away. There are two simple ways to do this. One is to plant more trees around streams and becks in the fells and the other is to allow the dredged valley rivers to meander i.e. wind like a snake, with the overflow taken up by surrounding flood meadows. More woody vegetation on the fells will create more carbon capture, greater biodiversity and when thinned over the years provide firewood or wood chip for local renewable energy needs. It seems at first glance like a win win. But I appreciate it is a huge shift to expect hill farmers in the Lake District, where land use has been dominated for a 1000 years by livestock rearing, to allow hard earned grazing land to grow trees. It will be both an economic challenge for them (as one of a number of things we will need to do as individuals to reduce our carbon footprint is to eat less meat) and a cultural challenge as hill farming is a still a way of life for many who manage the land. Still the transition can take place slowly with subsidies given to flood amelioration, increased carbon capture and enhanced biodiversity to make up for the loss of income of having fewer stock on the fells by a visionary government that looks beyond the next election. It may also be a challenge for tourists some of whom prefer the bare grassy fells but anyone who has walked in Norway or the Alps can imagine a revegetated Lake District would not be unattractive.

One hopes the astonishing achievement of 200 countries agreeing in Paris yesterday to binding targets to decarbonise will inspire and catalyse local action. The hard work needed to do this has to be done not just by governments but by all of us everywhere on this fragile planet including those of us in the Lake District as the recent floods have shown.