2016 ended on a positive note in terms of wildlife at Yewfield. We have just discovered two red squirrels resident in our woods. Although the red squirrel is native to the UK its numbers have plummeted and they are sadly now extinct in most of England. Although their populations have always fluctuated due to loss of woodland habitat and disease they have particularly suffered since the introduction of the American grey squirrel in the late 19th century. They are now officially considered an endangered species in England and even in the land of Squirrel Nutkin, Beatrix Potter’s lovable character, it is a rare sight to see them. Although the grey and red don’t fight and can live side by side, the grey outcompetes our native red for food resources. It is also is a more prolific breeder and is resistant to diseases that the red succumbs to. There has, however, been some good news on that front as some research is suggesting that reds are becoming more resistant to the parapox virus that has decimated them in the past. 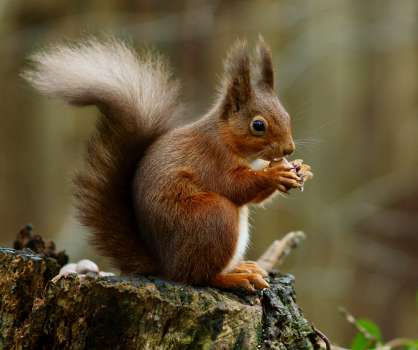 In our wood the red is to be found in an area of youngish, un-thinned larch trees. They can be spotted high up in the trees delicately dismantling the cones to get at the nutritious seeds. As they are approximately half the weight of the larger grey they can access the thin outer branches where the cones are. Greys tend to prefer broadleaved woodland where there are larger, more nutritious seeds such as hazel nuts and acorns. So it appears that a mixed, largely coniferous forest of seed-producing age between 16 to 30 years is a niche habitat that favours the reds over the greys, providing both food and cover for the reds. We have a number of areas in our woodland like that and we will continue to manage the wood to make sure there are these sanctuaries for them. 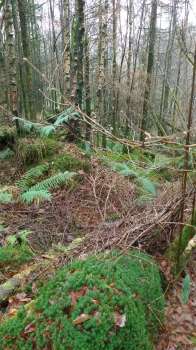 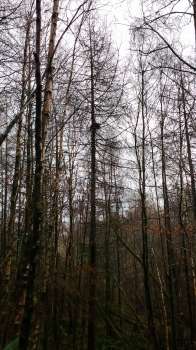 Towards the end of the winter when seed cones become more difficult to find we will supplement their diet with a seed and nut mix in a specially designed red squirrel feeder that greys can’t access. Fingers crossed the two reds are a male and female!