The pastures are sodden, running with winter streams and pockmarked with hoof prints. There is little for the ponies to eat save the new growth of rushes. This is the time of year we feel grateful for the harvest of our hay meadows, gathered anxiously in August in the few dryish days we had last summer.

Rose (in the background) is not a pure breed but certainly has a large portion of Fell in her and Quince (the one who could do with a haircut) is a cross between Rose and a pure Exmoor stallion. These native ponies are ideally suited to the kind of marginal land we live on. Come rain, shine or extreme cold our hardy ponies spend the entire winter outside, preferring it to the capacious stables we have built for them to retreat to in inclement conditions.

Breeds like these, along with other traditional breeds like Highland, Dale and Dartmoor, are often used for conservation grazing on nature reserves and play a vital role in maintaining the diversity and unique character of many habitats such as hay meadows, moorland and heathland. Ponies eat selectively, favouring grasses over the less dominant flowering plants, thus reducing the competitive advantage of the grass. They also seem to leave orchids alone and as well as grazing on the young rushes (and thus keeping them in check) they are also known to eat bracken, especially in late summer when it is less toxic. One local horsewoman we know believes the chemicals in the bracken may give them protection against worms.

A danger for horses in spring is to gorge themselves on the vigorous new growth of grasses, which can give them laminitis, a serious inflammatory condition which lames the animal. On the kind of marginal land we have here with low levels of nutrients and only moderate grass growth this is not a problem. Although meadows like ours are poor in protein the grazing does provide a variety of minerals and vitamins as different plants form roots at different levels and a diverse selection of flowers and grasses will accumulate a variety of nutrients. 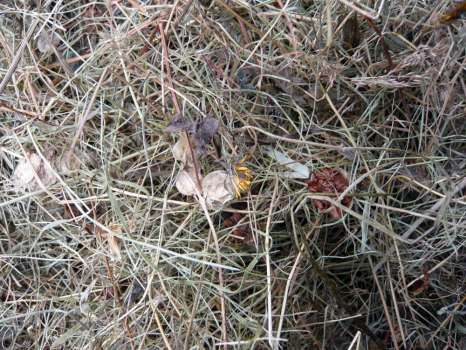 Luckily these native breeds tend to prefer latrine areas, rather than dropping their dung all over the fields. It makes it much easier for us to collect the muck and use it for making compost for the garden. You will see that all our apple trees in the orchard below the house have a mix of muck and old hay spread over their root zones. As these piles decompose worm activity will increase, nutrients will be made available for the roots of the apple tree and the long sodden soil will be better aerated. Roll on spring and apple blossom!