The crab apple tree outside the conservatory is a larder for birds right now. Male bullfinches with their black crowns and rose-pink breasts are a real treat as they don’t come around here very often. The tree is the Hupeh crab - Malus hupehensis. We have three more of them in front of the house on wettish soil. It is a good choice for wet sites as unlike most apple varieties it doesn’t succumb to scab and canker. It has lovely snow white blossom in spring. It is our plant of the month. 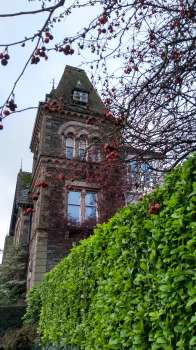 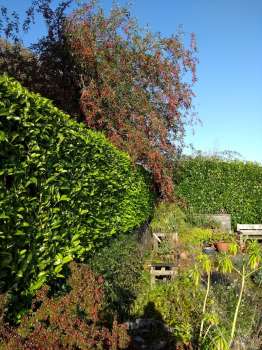 We have been carrying on with our tree planting. Of the 3300 we have to plant this winter 2400 are in, mulched with biodegradable mulch mats and pegs and protected with recycled plastic shelters. A good day for two of us is 50 trees. That includes a relaxed breakfast with a 10am start, a morning tea break and an hour long lunch. It gets dark at 4 pm so we pack up and head back for a cup of tea and a mince pie. It is hard work for an pair of old crocks stumbling around in the brash from last year’s felling. But it is deeply satisfying in so many ways. 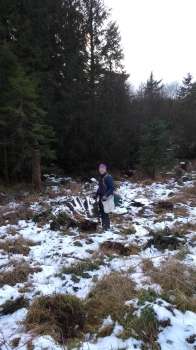 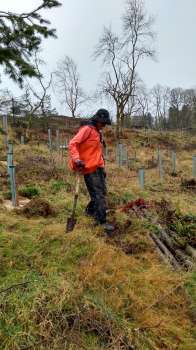 As mentioned in previous blogs we are planting mostly native broadleaves here at Yewfield following John Rodwell’s New Native Woodland guidelines. My forestry friends complain that I am not planting enough conifers but I suspect that in a few years there will be some spruce and larch naturally regenerating in the many open areas we have left along with birch and rowan. My conservationist friends are pleased to see a former larch plantation being restored to native trees and shrubs with lots of scrub around the edges and along tracks. They don’t like to see conifers but in the end our survivors will enjoy and benefit from a mixed broadleaved and conifer wood - good for wildlife and trapping carbon, attractive in the landscape and productive in terms of firewood and timber to boot. 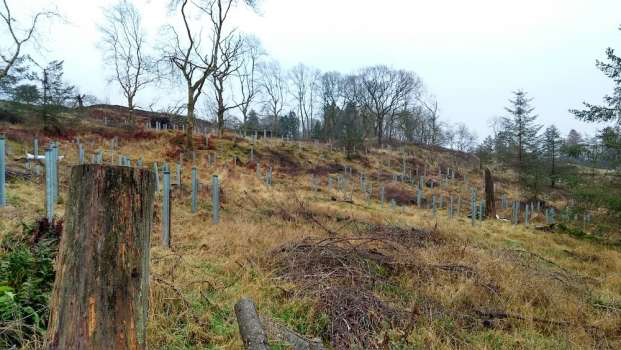 In the run up to the election every political party was upping the ante on planting trees. It was one of the few policies everyone could agree on. And it is a no brainer as a tree is the perfect answer to catch and store carbon, improve biodiversity, provide fresh invigorating air and alleviate flood water. But it begs many questions that have yet to be addressed. How many farmers will want to give up crop or grazing land for growing trees unless there are attractive financial incentives from the state to do so? Many farmers see themselves as food growers not foresters or park wardens. There is an explosion of deer numbers in this country so how can we be sure a newly planted tree can survive unless deer numbers are controlled and how is that to be done? What species should be planted given the tree diseases in the country or should woodlands emerge from natural regeneration? Do our tree nurseries have enough UK grown trees to meet demand? In the rush to ‘get Brexit done’ and meet the growing demands of our health service I suspect the enthusiasm for tree planting will quickly fade.

I have been rereading an old classic that should be read by anyone who looks after land. It is A Sand County Almanac by Aldo Leopold written in 1949 but ever so relevant today. Like us he lived on 80 acres of poor marginal land in Wisconsin and observed through the year what was going on in his patch. Like us he didn’t have to scratch a living off his 80 acres but it had to be self supporting. What we as a nation do with land in the coming years will be central to meeting our climate change commitments. Aldo Leopold’s last chapter is titled A Land Ethic and it is an inspirational guide for those of us who work on the land. I’ll end the blog with one of his quotes:

'Conservation is getting nowhere because it is incompatible with our Abrahamic concept of land. We abuse land because we regard it as a commodity belonging to us. When we see land as a community to which we belong, we may begin to use it with love and respect.' 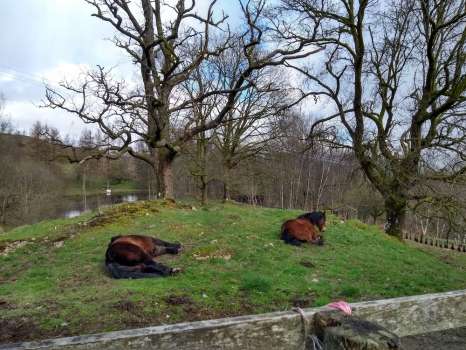