If you live in the UK you can scarcely have failed to notice that last weekend many of us were counting birds in our gardens for the Big Garden Birdwatch run by the Royal Society for the Protection of Birds. Over 500,000 people took an hour of their time to do this, and the Birdwatch has taken place for over 35 years, providing invaluable if not always encouraging data about the decline in garden birds like house sparrow and starling and the rise of others such as woodpigeon or coal tit.

The bird feeders here hang from the trained plum on the side of the Studio. Unsurprisingly a preponderance of woodland and garden birds come to the feeders as a rule - blue tit, coal tit, great tit and long-tailed tit, nuthatch, chaffinch, blackbird, dunnock and robin, with the occasional appearance of a great spotted woodpecker, greenfinch or goldfinch. This year was no exception but there were fewer birds and fewer species than there have been in all the years I’ve been doing this. At first I put this down to the resident sparrowhawk that we have seen several times recently careering round the corner of the shed, banking its wings in a flash, picking off a small bird and disappearing with it - or missing the kill altogether, which happens just as often. However I do not think this is the explanation. The very mild winter means that there is more food for birds in the countryside and fewer have been tempted to garden feeders. For the same reason many birds such as blackbirds that would normally migrate here in their multitudes to escape the harsh winters in Scandinavia have remained over there. Last year we had a flock of several hundred goldfinch roosting in our wood and their swirling flight and bubbling chatter animated winter dusks. This year I haven’t heard a single one.

This warm and excessively wet winter has also kept visitors away. Storm Desmond in early December and the media publicity that followed in the wake of the floods, along with the succeeding storms and gales have dampened people’s enthusiasm for winter in the Lake District. It is the first year for as long as I can remember that no bed and breakfast guests have come to Yewfield in the first week of February.

As another band of heavy rain and wind rolled in this afternoon I rather pointlessly attempted to unfurl the sodden prayer flags that hang on a string from a shed to the gable peak of the greenhouse. The winds have wrapped them round the string and tattered them to a shadow of their former selves, when they fluttered in late summer over a brightly coloured garden. Perhaps they’ve been doing their job, as we have - so far - been very lucky in all the storms. The last one - Henry - announced its coming with rainbow clouds at sunset, a rare formation known as nacreous clouds, in which ice crystals high in the atmosphere reflect the sunlight. 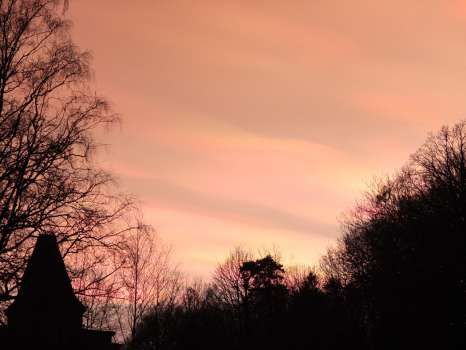