With record-breaking winter temperatures of 20.6 degrees in Wales today one might well wonder. This delicious but unsettling warmth is all the more remarkable when we think back to the so-called ‘Beast from the East’ weather that was about to grip the country at this time last year. More on this later.

Sitting at my window at 5am the other morning towards the end of a sleepless night, I heard the rumble of a vehicle coming up the road. In the pre-dawn gloaming the vehicle’s lights gave it away as a timber truck. It was starting work early indeed, but there is a great deal of timber to pick up as the National Trust have been felling larch around Tarn Hows and in Sawrey Ground Plantation adjacent to our land for a few months now. They are doing this for the same reason we had to because of infection with Phytophthera fungus, but as the area involved is so much greater than ours they have opted to use an enormous commercial harvester and forwarder to fell and extract the timber. If any of you staying at Yewfield have walked up to Tarn Hows recently you will have witnessed the scale of the damage to the soil by the heavily-tracked machines. I managed to get lost recently on my way up to the Tarn, disoriented by the massive ruts and swathes of felled logs. It is to be hoped that some effort will be made to smooth out the ruts and to replant once the felling operations are over. 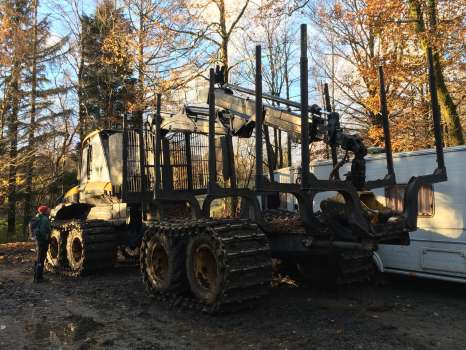 Our newly planted wood of 2,700 trees now awaits the spring. We have to keep looking on the bright side of this Phytophthera infection, looking forward to a fresh and diverse woodland growing up and enjoying the views that have been opened up by the felling. However as the felling removed shelter from the trees left behind they in turn became vulnerable to wind-throw and many of the more mature birch and holly have come down in winter storms or had their tops snapped off by the wind. We have managed to top the fallen hollies and hoist them back again in the hope that they will re-root and sprout new growth. Critical to the success of the new planting will be keeping the deer out, thus the deer fence and gates we have erected.

Quite apart from recent unseasonal warmth, records submitted to the Nature’s Calendar project run by the Woodland Trust indicate that November and December of 2018 were about one degree above the 1981-2010 average. The warm weather tempted insects out of hibernation - a small tortoiseshell butterfly for instance was spotted on Christmas day in Wales, three months early, and snowdrops have been seen in flower since November. Significant changes to normal patterns like this could have drastic effects on our native wildlife and may be due to climate change.

Here at Yewfield the large-flowered snowdrops on the patio – Galanthus elwesii – have been drawing our honey bees, along with early-flowering, pollen-rich rhododendrons. The bees are out in high numbers in this warm weather. So far we have managed to get our two hives through the winter but early spring is a critical time when the bees come out into the warmth to forage but find little food. The fact that they are active means they eat more of the winter supplies of fondant that we have put in the hives. Ironically it is quite common to lose a hive to starvation at this time of year after it has come through the winter. Some cool evening this week we will top up their supplies with a pollen feed. 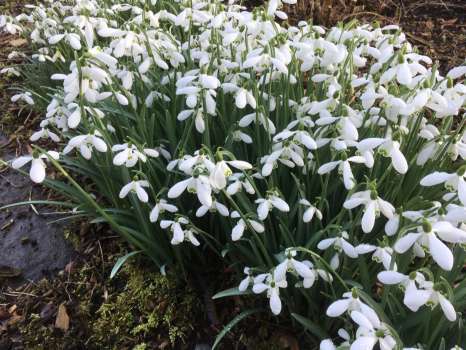 Bird song is swelling by the day and it was a delight to hear my first song thrush of the season last week pouring its song from a perch on top of a crab apple. We have been participating in the British Trust for Ornithology’s tawny owl survey this year. Although tawny owls are Britain’s commonest owl relatively little is known about their calling behaviour and distribution. The survey aims to fill out the picture. Participants have been spending 20 minutes a week over autumn and winter listening out for the owls and recording the presence of both males and females, or equally importantly recording that no owls were heard. We certainly have breeding pairs here, no doubt attracted by the woodland with its nesting sites and the larder of small rodents like voles which frequent our pastures and long grass areas.

The survey is another example of citizen science to add to Nature’s Calendar and the popular Big Garden Birdwatch run by the Royal Society for the Protection of Birds every January and it is inspiring that so many people take part. What has been even more inspiring is the Strike for Climate Change by school children throughout the world. Surveys provide vital information to track change, but the wellspring of care comes from the hearts and minds of people who value what we have, fear that we may lose it and are not afraid to come out and call politicians and the older generation to account and action.