There has been a lot of coverage about forests on radio programs recently. It became clear in the climate change conference in Poland over the last fortnight the vital role that forests play in locking up carbon. There is much talk here in the Lakes of reforestation in the fells. Flood defences are a real concern after Storm Desmond, biodiversity appears to be declining particularly invertebrates, pollinators and some species of birds by a variety of causes including climate change and the market for meat is on the decline as the reality of climate change begins to register in the public’s mind.

It is Christmas Eve and it has been a stunning cloud free day after weeks of mist and murk. It was time for a winter wander. Standing on Holme Fell this afternoon the mountains were so clear and the air so still I wanted to reach out and touch them. Forests clothed the Tilberthwaite and Langdale valleys in various shades and shapes of brown, mostly oak, ash, birch and larch with patches of conifers here and there. They looked right in the landscape in colour and scale. But if the diseases Phytopthera in larch and Chalara in ash keep spreading what will Lakeland land owners replace them with? It will have to be a mix of tree species suited to the soils and climate if we are to keep our forests in the future. Who knows what tree will succumb next. Oak processionary moth is beginning to get a hold on oaks down south. 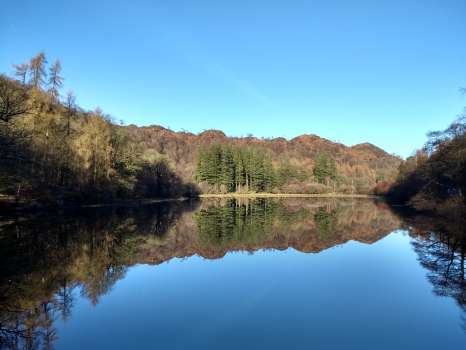 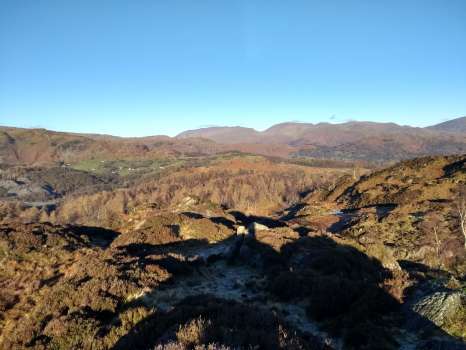 A couple of weeks ago we visited Barfil Farm near Dumfries. In 1992 the owners planted new woods around their farm using a similar mix of tree species that we are planning to use with similar objectives to us ie a matrix of native broadleaves with some conifers for timber; to create wildlife habitat; to provide shelter and landscape interest around the property and to have an educational resource for schools and visitors. It was fascinating to have a sense what our forest might look like in 25 years. 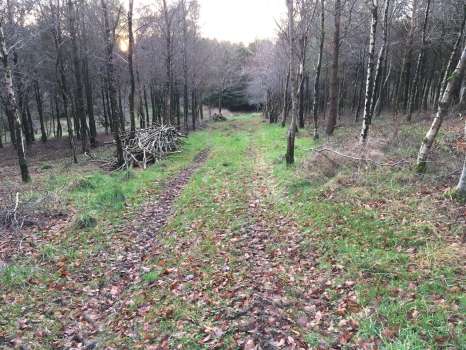 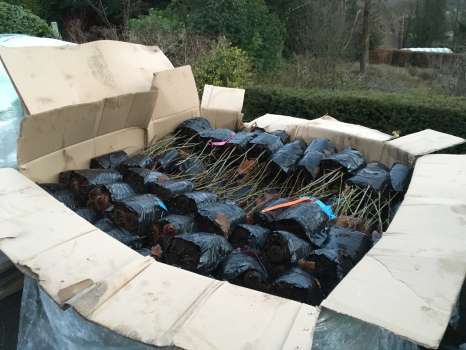 Last week we received 2700 trees and shrubs in a box -sessile oak, scots pine, aspen, common birch, hairy birch, sycamore, beech, Douglas fir, Norway spruce, bird cherry, hawthorn, blackthorn, goat willow, crab apple and hazel. The planting is a matrix of native broadleaves with groups here and there of conifers and shrubs lining the track and windward edges. We’ve planted about 900 last week in an area to the north of the house we call the Greene Wood after a friend who donated towards the planting. Christmas is here and we are ready for a break. 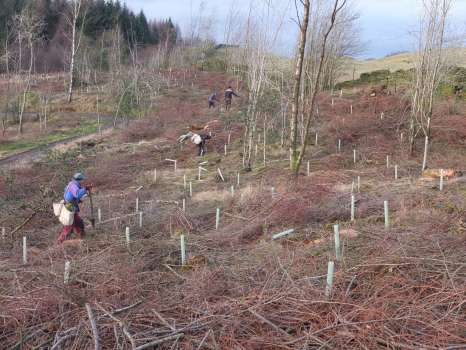 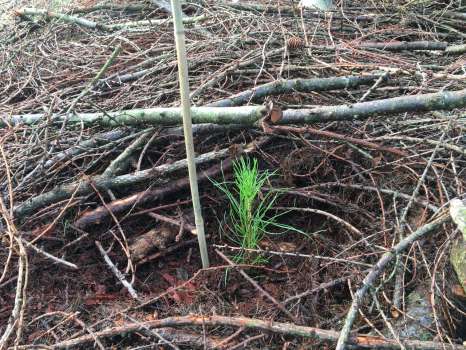 I am writing this while listening to Radio 3’s Sound Walk: Winter Wanderer. It is a ‘slow radio’ program of a narrated walk in the Black Forest of Germany interspersed with songs from Schubert;s ‘Winterreise’ and readings from writers celebrating nature. Last Sunday, again on Radio 3, was a program called The Pine Tree which was an exploration of the pine family Pinacae. The pine family includes pines, spruces and firs and it focused on Christmas trees of course which traditionally would have been and for many still is the Norway spruce. An interesting tidbit in the program was that in the 17th and 18th C the British navy ships were not only made of oak but also of pine especially the masts. Oak we had but pine we had to find from abroad and when the Danes refused to let the Brits in to the Baltic countries to source their masts the Brits responded by trashing Copenhagen. And a couple of Mondays ago Andrew Marr’s ‘Start the Week’ focused on forests hosting Peter Wohlleben who wrote the best seller ‘The Hidden Life of Trees’. Lots of fascinating facts came out of that interview including this one: the saliva of leaf eating insects can be ‘tasted’ by the leaf being eaten. In response the tree sends out a chemical signal that attracts predators that feed on that particular insect. He calls the capacity for trees to communicate with each other above and below the soil ‘the wood wide web’. He also claims that the oldest living tree in the world is a Norway spruce up in the north of Sweden that is 9,500 years old. So that Christmas tree in your living room has more stories to tell than you can ever imagine. These are wonderful examples of how culture is inspired by nature.