lStorm Arwen has left a trail of devastation in its wake here in South Cumbria. Yewfield has got off fairly lightly in terms of tree damage. A couple of Scots Pines fell over the entrance road and some mature spruces toppled over in our forest but compared to Under Loughrigg near Ambleside and the south end of Coniston Water we were lucky. Those areas were badly hit and hundreds if not thousands of trees came down.The electricity was off for five days but that didn’t affect ongoing garden and land work. Keeping the firewood supply topped up was an essential task last week with the heating off and will continue to be through the winter. We use over 20 tonnes of firewood each year so it is a year round task to cut, split, and dry under cover for a year firewood for the eight wood stoves we have around the place. 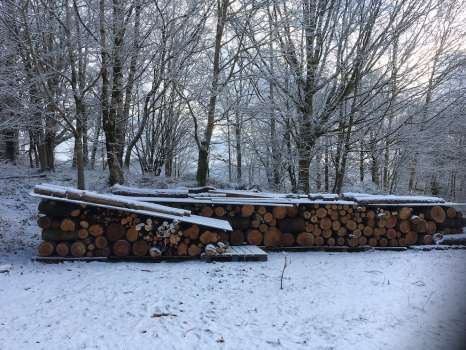 With the COP meetings in Glasgow recently we have been thinking about our carbon footprint. As many of you know we run a vegetarian guest house and have a wood chip boiler that heats the house and cottages. So that is a start. When we bought our 20 hectare woodland a decade ago we calculated that we could take enough forest thinnings i.e approximately 100 tonnes per year, in perpetuity to feed the boiler without affecting the capacity of the woodland to keep regenerating itself. In other words taking the interest from the forest but not the capital. In the last few years much of those thinnings contracted larch disease and we had a statutory requirement to fell them. Nevertheless we have built up carbon credits for some years to come as the diseased larch was taken to the same mill 20 miles away that we would have taken them to before larch disease. Looking into other low carbon heating systems we unfortunately have too many trees around the buildings here to justify solar panels. We are on a big slab of rock so ground source heat pumps would be too costly. Air source heat pumps are still too noisy and inefficient for large houses. The stream down by the tarn could generate some electricity with a micro hydro system but it would take at least ten years payback and this dry summer the stream was hardly flowing for weeks at a time. With the price of gas doubling and the need for us to aim for net zero in the not too distant future we are wondering what more we can do other than more insulation. Climate change is really making us rethink how we live. 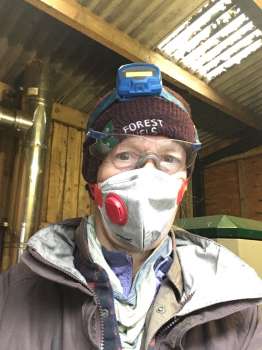 Surprisingly our pony Quince contracted laminitis this fall. Laminitis is a foot infection bought on by grass that is too rich. The warm wet weather we had in September and October after the dry summer brought on a dense flush of grass in our pastures. Another theory is that the increased traffic in the Lakes contributed to more nitrogen from the air fertilising our pastures. When we got the vet in he said laminitis was rife in the Lakes this autumn and he hadn't seen it like this before. Our ponies have never been affected by laminitis as we do not fertiise our pastures. They are full of wildflowers and non vigorous native grass species, full of vitamins and minerals but comparatively low in sugars and protein. We had to bring him in to the stable, put him on antibiotics, wash his infected foot daily and put him on low rations for several weeks. He was not too pleased with this regime but he has now recovered and with the recent frosts and heavy rains the pastures have withdrawn much of their sugars to their roots so it is safe for him to go out again and join his mother Rose. Truth be told, Quince is a bit of a tubby pony so I have started an exercise program for him with the aim of getting him back into harness and pulling out firewood again. He has done it before so we won’t have to start from scratch other than to get him fit first. 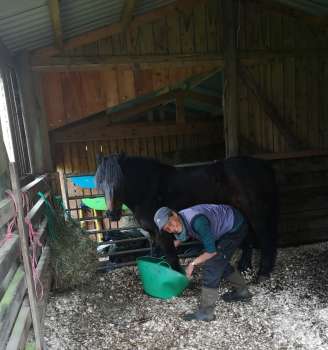 We collect as many leaves as we can and store them in leaf mould cages. Last years leaves are almost broken down enough to use them in home made seed and potting composts. We are going to try and make our own seed compost next sowing season. We normally buy in proprietary peat free composts but with our own home made compost and leaf mould we should be able to do it all ourselves. I like the notion of ‘circularity’ where one action feeds into another - our bees pollinate our flowers and fruit and they give us honey and in turn we keep them healthy. Our hay meadows feed our ponies who leave us their dung which feed our vegetables and in turn we keep them healthy. Our woodland keeps us warm and with proper management supports biodiversity and carbon capture. It is a modest attempt at sustainability in action here at Yewfield.