In the last fortnight we took off 161 bales of hay from our species rich hay meadows. It was perfect hay making weather - a rare event in this damp and cool part of the world. That should take the ponies through the winter. We start feeding them a bale a day in December and this year it continued to the end of April. Given ‘climate weirding’ a more accurate term than climate warming, we need to think of having enough for five months.

The three weeks of hot dry weather had its downsides though. Newly planted veg and plants in pots needed watering twice a day and even though we have 10 water butts collecting rain water off the rooves of the greenhouse, barns and sheds they were emptied in a week. To be honest, we have too many pots. They look lovely on the patio and it gives us the chance to ring the changes when something finishes flowering but it also, and not before time, primed a deeper conversation about what we can manage as we get get older and more decrepit. Chris Packham had a lovely phrase on TV the other night. As he was climbing St Catherine’s Hill near Winchester he panted “I’m not very fond of my accelerating decrepitude”. With both of us into state pension age and arthritis taking the fun out of what should be enjoyable physical activity, it is time to come up with some labour saving ideas.

Here are a few we came up with: no chickens, less veg and more ground covering perennials or soft fruit, fewer display pots, a proper irrigation system for the middle and upper gardens and (possibly) scrapping the plant sales table. In the past we have been able to manage it all with the help of volunteers but in the last two Covid years we have had precious few and who knows when they will come back or if we will want them back. Add to that the uncertainty with our climate means it is time we need to take stock. We will keep you posted on how our plans play out. 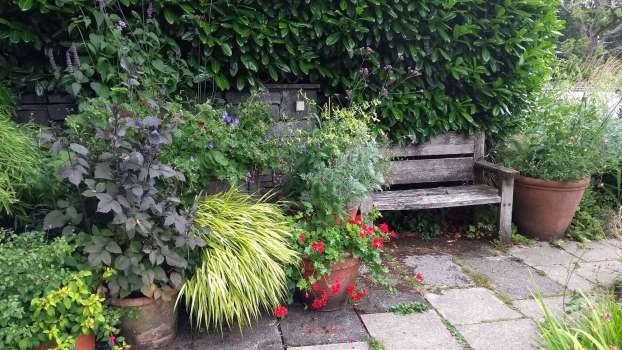 It has been an excellent summer for our bees. We took off 60 lb. of honey from two hives while leaving full supers on them both, with the late summer and autumn nectar and pollen to fill their stores further for the winter. We are in the process of putting it into one pound jars and it will soon be on sale for guests on the plant table. I read today that a new study has found that combining pesticides has a compounding effect on bee fatalities and is much worse than a pesticide on its own. Most farmers combine pesticides so it is no wonder our pollinators, and insects in general, are having a rough time. We have seen precious few butterflies this year even though it has been a great summer for them.

We’ve not cut some of our lawn meadows this summer leaving them for late summer flowers. Harebell, black knapweed, devil’s bit scabious, greater burnet and betony are in bloom now giving pollinators a late source of wildflower nectar and pollen. 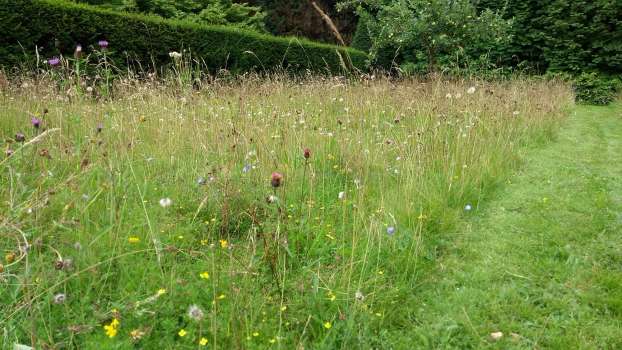 We are lucky to have a couple of volunteers here for a fortnight. They have been thinning apples on our fruit trees. It is a bumper crop this year. What with hay making taking much of our time in the last two weeks we haven’t got round to thinning the apples but even at this late stage I think it is still worth it. It balances the tree’s energies, swells the remaining apples and lightens the branches as autumn winds threaten to break whole branches if they are too laden with fruit. 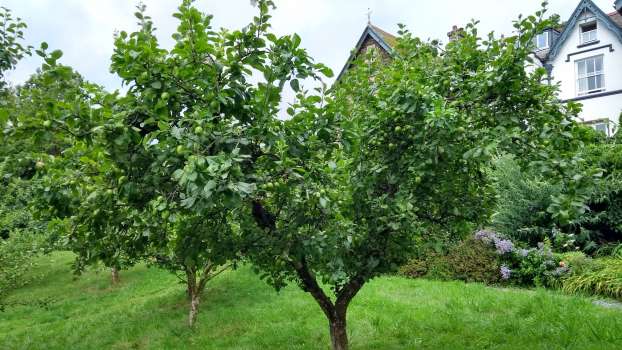 The other summer job that follows on from the hay making and honey gathering is hedge cutting. Trimmed hedges give a sense of order to the lush abundance of summer growth in the borders. The Arts and Crafts Movement over a century ago was and still is a major influence in garden design. The movement stressed the importance of a contrast between the geometry of hedges and the floral diversity of perennials. It gives the sense, some cynics might say, the illusion, of a harmonious relationship between human culture and nature. 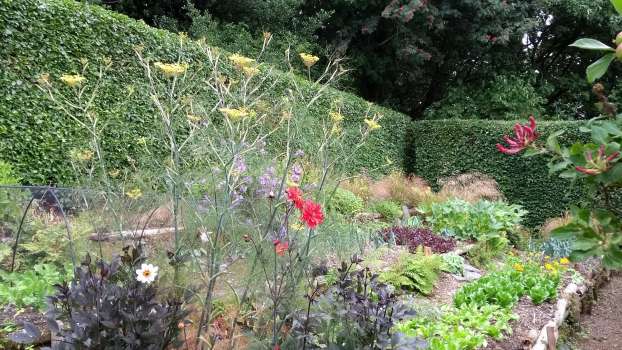