The glory of Autumn

After weeks of rain we have finally been blessed with some dry, cool, sunny, quintessentially autumn weather. Red and yellow pigments are coming to the fore as green chlorophyll is being absorbed back into the twigs and branches to lie dormant until light and soil temperatures swell leaf buds next spring. Japanese maples are the show stoppers here at Yewfield especially the palmatum varieties but also looking very attractive are Metasequoia glyptostroboides or dawn redwood. Previous owners who lived here in the 1950s and 60s, were friends of the head forester of the Forestry Commission. He gave them two seedlings of Metasequoia to plant in the garden here. The species was thought to be extinct until it was discovered in a monastery garden in China in 1947 so our chap had some of the first introductions into this country. Metasequioas are deciduous conifers like larch so just before they drop their needles for the winter they turn a lovely peachy bronze colour. They are Yewfield’s plant of the month. 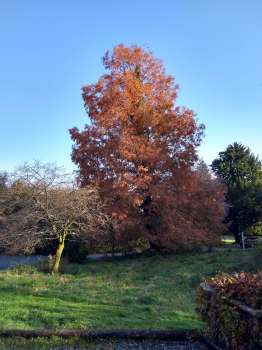 It has been a good year for apples. Our 'Tolstoy' apple tree has fruited very well this year. It is called Tolstoy because our friend Sally Beamish, who was head gardener at Brantwood, went to a John Ruskin conference some years ago in Russia at Tolstoy’s estate. She managed to bring back some grafting material and eventually presented us with a young apple tree. Sadly Sally passed away with cancer a couple of years ago but we remember her as we crunch into this juicy, slightly pineapple tasting apple. 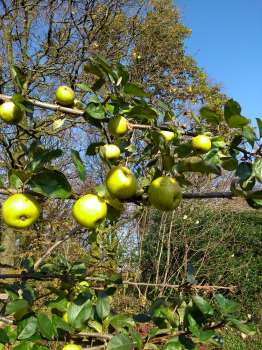 Also looking very bounteous right now are the crab apple Malus hupehensis. It has small bright red crab apples beloved by blackbird and thrushes. Also looking superb at the moment is our medlar - Mespilus germanica. After picking we wait for a process known as ‘bletting’ i.e. turning brown but not so they begin to rot. Bletting sweetens the fruit and breaks down indigestible acids so that one can then make the tastiest jelly imaginable and if combined with a few crab apples the magic of these blessed autumn days will brighten up our breakfasts well into the dark days of winter. 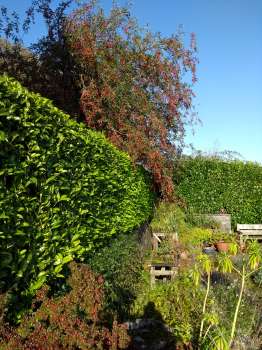 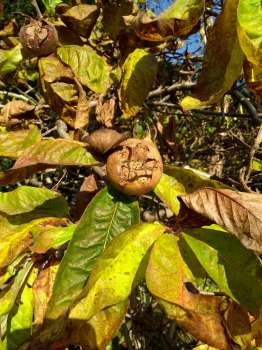 Work began recently on the mammoth task of replanting the forest that was affected by larch disease. Although most of it will be replanted with native trees and shrubs we have planted up a small experimental plantation of mixed conifers. We are interested in seeing what can happen if instead of one species, as is usual in a plantation planting, there are multiple species, in this case, Douglas fir, Norway spruce and Sitka spruce. Larch will also pop up here and there as it was a larch plantation originally. All these trees more or less have the same vigour so should grow happily together as they do in conifer forests such as in British Columbia. The reason for planting them together is because some of our most productive forestry trees may well succumb to disease, as larch did, or be challenged by excessive drought or rain with climate change, so if a mixture is planted a forest might not be so severely affected in the long term. I noticed on Autumnwatch last night that in Scotland the Forestry Commission is adopting this strategy on a commercial scale. Hopefully the England FC will follow suit. 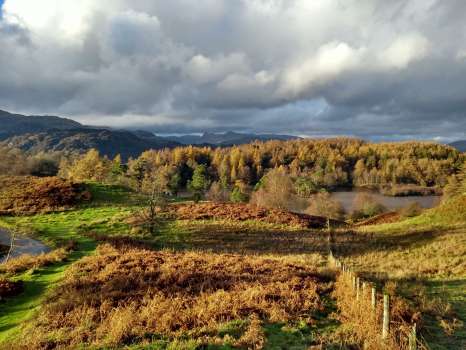 I attended a conference recently at the University of Cumbria called ‘Reimagining the Uplands’. With Brexit lurking on the horizon bringing uncertainty to livestock markets, along with the risk of more flooding as a result of climate change and on top of that the grants and subsidies many hill farmers depend on winding down, there is the need for some imaginative thinking on how we will manage our precious Lakeland Fells in the future. Although the Lake District has been declared a World Heritage Site largely on the basis of the culturally designed landscape created by hill farming, change is coming in spite of the WHS status. Our landscape is at a tipping point. If hill farmers are finding it more and more difficult to make a living farming in a traditional way what happens to the land? One option that was proposed in the conference and ticks a number of boxes is tree planting on poor marginal grazing land. It could help to prevent flooding, increase wildlife diversity, bring more visual diversity to the landscape and provide an additional income to farmers. However to many farmers this idea is an anathema. Hill farmers have for generations tried to maximise the area of land they have to grow grass for their animals. But any monoculture is unstable not only ecologically but also economically with downstream consequences with flooding as we saw with the devastation in Cumbria wrought by Storm Desmond a few years ago. It is a dilemma with no clear solution and it will require each land owner to reassess and reimagine the potential of their land in the light of the situation we are in. Change is coming to our treasured Lake District landscape, like it or not. Can we manage a transition so that landscape beauty, land owner’s livelihoods and wildlife can coexist? I will write more on how we are approaching this dilemma on our 80 acres in the next blog.