It has been an educational weekend

It has been an educational weekend especially for ‘thinking outside of the box’. On Saturday I went to the Furness Beekeeper’s Spring Convention - a good time to chat to other beekeepers and to pick up any beekeeping odds and ends such as foundation wax or surgical gloves. I picked up a queen marking pen and some pollen patties as we seem to be having a chilly wet spring so far - not great for our eager bees who desperately want to go out and find some pollen at this time of year.

There were two talks in the morning that definitely had me thinking outside the box. The first speaker felt it was high time to speak up for drones. Drones are the unfertilised male bees and their primary function is to fertilise the virgin queen. As we all know there are a variety of ailments affecting all bees right now. The list includes the varroa mite and the viruses they carry, insecticides particularly neonicitinoids but also varroicides, used in the hive to control varroa. Drones appear to be particularly sensitive to these. Drones are ponderous flyers and easy to pick off by birds such as blue tits at this time of year and later in spring by flycatchers as they gather in their mating areas waiting for virgin queens to show up. Hence our beleaguered drones are experiencing a steadily declining gene pool. That in turn affects the viability of the fertilised queen and the future health of the hive. So beekeepers out there don’t do what I have been doing and removing drone larvae as an organic way of controlling varroa or thinking drones are just eating our honey and are good for nothing spongers. The future of the colony and our bees in general depend on there being lots and lots of healthy drones. 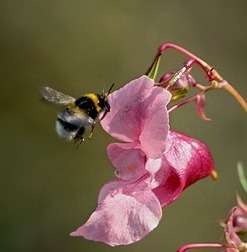 The second talk was about the benefits of himalayan balsam. The conservationists among us will be throwing up our hands in horror as I was at the beginning of this talk. Balsam bashing is de rigeur on nature reserves and rightly so but the speaker was putting the case that outside of nature reserves balsam is the plant par excellence for our bees. All bees in fact - all 250 species native to the UK most of whom are solitary. When balsam flowers in late July and August it is by far the biggest nectar and pollen producer in Europe. No other plant comes close. If we want to save our pollinators we need to reconsider our relationship with some invasive plants. Japanese knotweed might be next…who knows. 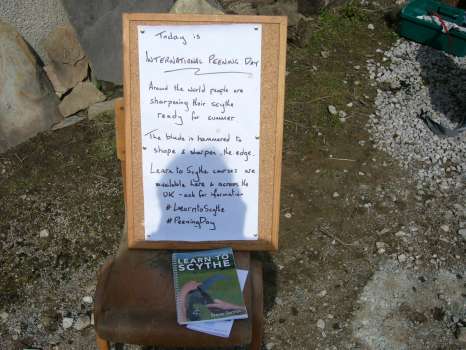 On Sunday we went over to Broadrake in Yorkshire for International Peening Day. Don’t worry, you are not the first person to ask what ‘peening’ is. To keep a scythe blade sharp it needs to be peened i.e. hammered on an anvil to draw out the blade as thin as possible. It is then dressed further by three grades of whetstone until it is wickedly sharp. This allows it to cut grass much more efficiently. We weren’t sure how many people around the world were peening on Sunday but there were nine of us in a barn in Yorkshire banging away to our hearts content in between cups of tea and yummy homemade cakes and biscuits. Thank you Peter and Rachel and also thanks to Steve for the peening tips. 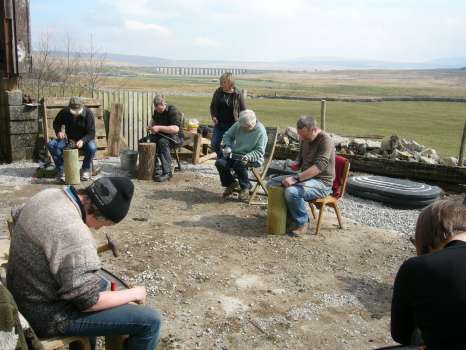