We have been planting trees up in the larch plantation just off to the left of the footpath up to Tarn Hows. We are looking after our woods using Continuous Cover Forestry (CCF) methods which allow for natural regeneration of existing seed stock to replace trees that have been cut and extracted. For CCF to be effective deer browsing has to be strictly controlled and as we have deer in the forest we are using deer netting to protect the germinating seedlings. Just in case the regeneration is patchy we’ve decided to plant in young trees as well. It also gives us a chance to add some different species. 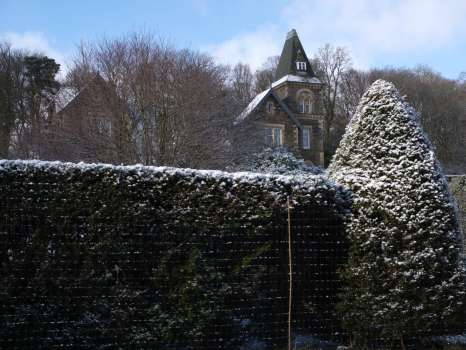 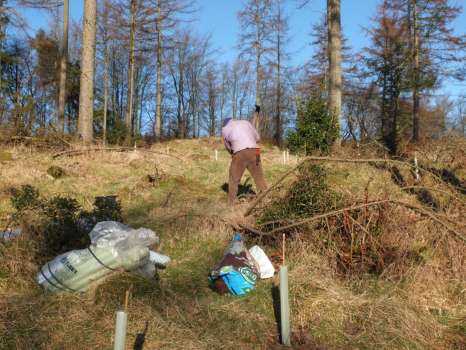 The ones we are adding are aspen, birch, sessile oak, hazel, rowan and yes, sycamore. It is a reasonably exposed site so we thought sycamore would be good on the rocky, windward edge along with rowan. Sycamore is gaining more notice for planting in upland sites as a useful species for firewood and biomass. From a conservation perspective it attracts a variety of lichen and moss and harbours aphids which are important food for birds in spring. Sycamore is an introduced species that has naturalised i.e. it reproduces on its own, rather than a native species but is part of native mixed woodlands on the continent. It just never made it over to the UK 9000 years ago when the bridge connecting us to the continent was flooded. Conservationists have not been happy with it in ancient woodlands as it isn’t officially native, can shade out ground species like primrose and violet and is a prolific seeder but as our plantation was planted in pasture in the 1960s with no specialised ancient woodland species present we are putting it in the planting mix. 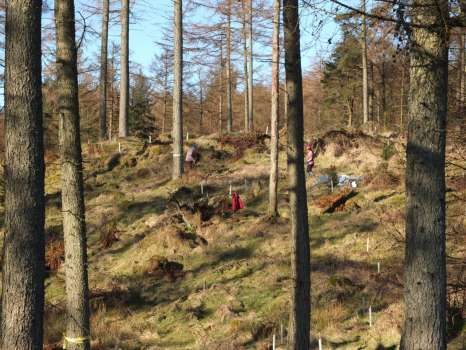 As the regeneration will be largely larch and spruce we concentrated on adding deciduous species both for landscape and for conservation reasons. Research coming out of Norway suggests that birch and aspen can be good biomass replacements as they grow almost as quickly as our beleaguered ash trees. They won’t however replace the importance and look of ash in our Lake District landscape. If we are to have multi-use woodlands in the future that continue to provide us with wood, look more natural and be better for wildlife we need to think outside the native and non native boxes. With the threat of tree diseases such as larch disease and ash dieback to worry about, and who knows what is next around the corner, then we need to be more radical about creating our future forests.