Pests and predators at Yewfield

How to deal with pests and predators at a vegetarian guest house and County Wildlife Site can is an ongoing dilemma. One can argue that all creatures have as much right to our veg, flowers, hedges and trees as we do but on the other hand one can also argue we are part of nature too and should accept our role as predator in the food chain, in lieu, of course, of other predators. Our approach with the gardens and

land at Yewfield is to integrate food production with aesthetics in the garden along with promoting biodiversity. It can sometimes prove to be a recipe for conflict with our fellow non human species.

One such conflict is with roe deer. In spite of trying to deer fence off our two acre garden, they have found their way in and now treat the garden as part of their territory. One of their favourite nibbles is yew. To most animals yew is highly poisonous but to deer they apparently use the plants toxins as a wormer. We have noticed our native ponies nibble bracken for the same reason.

We have over 100 metres of yew hedges at Yewfield and to prevent them from becoming lollipop shaped we had to come up with a solution. Keeping the deer out was impossible as gates are often left open and at night like thieves they come. Culling was out of the question so we have been trying deterrent sprays. One that looks promising is Grazers - a calcium oxide solution made here in Cumbria. We spray the hedges once a week and it seems to be doing the job. It also works for rabbits and pigeons. Grazers also do a formulation for slugs and snails but I’ll hold that discussion for a future blog. 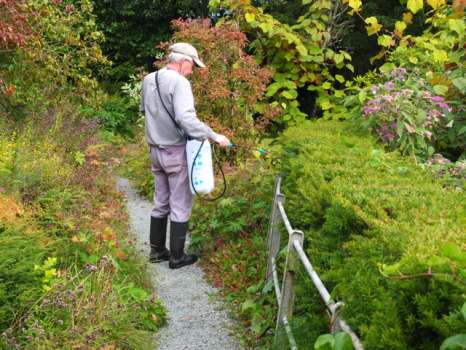