Our Bees Are Spoiled For Choice

It has been largely cool, wet and windy this past week but that hasn’t kept our bees in the hive. The lime trees are still in blossom, bramble in the hedgerow is in full flower, heather on Tom Heights above Tarn Hows paint the hillside pink and purple, clover speckles white and red in the still uncut hay meadows and garden flowers such as geranium, astrantia, campanula and daisy, all good nectar and pollen plants for bees still dance in cool breeze. Next week rosebay willow herb will be out, another favourite bee plant. It is the beginning of August and already it begins to feel like summer is on the wane. The shadows are lengthening, the light is changing. It’s time to take the honey off. So on Thursday we took three and a half supers full of set comb off of two hives making sure to leave plenty for the bees to get through the autumn and winter. We have yet to extract it but my guess it will yield 60 to 70 lbs of honey which should be enough to supply the B&B for next year. 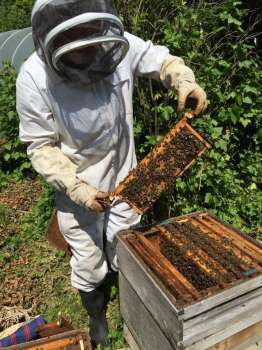 While on the subject of bees I’m going to have a bit of a rant. I heard the other day that DEFRA has caved in to pressure from the NFU and pesticide companies to allow previously banned neonicitiniod insecticides to be used again by farmers in spite of mounting evidence of the damage these products are having on our bees. We are not in arable country here at Yewfield so our bees are not affected by these ‘neonics’ which are used both as seed treatments and sprays on rape, cereal and vegetable crops to kill aphids and other pests. Or so I thought… A recent article in the Saturday Telegraph gardening section stated that neonics are commonly sold at our local garden centres to be used for pest control in the domestic garden, imadocloprid found in Provado by Bayer, being one popular example. So even if my bees are not exposed to rape crops here in the middle of the Lake District they still may have contact with neonics in my neighbour’s garden. Yikes! To quote Wikipedia, hardly known for being alarmist, ‘To members of the genus Apis, the honey bees, imadocloprid is one of the most toxic chemicals ever created as an insecticide’. According to Professor Dave Goulson of Sussex University, who published an article as long ago as 2012 in the journal ‘Science’ where he studied the effects of neonicitinoids on bees, he found there was an 85% drop in queens produced in bumblebee nests. Being neurotoxins they affect a bee’s ability to navigate and hence their ability to bring back pollen to the nest. Three quarters of our food crops are pollinated by insects , mostly bees, Goulson says. Last year he worked out from government figures that only 1.3% of the rape crop was lost to flea beetle during the ban on neonics. Conserving our bees is something we can all participate in. Plant bee friendly plants in your garden (there is a comprehensive list on the RHS website) , avoid using neonicitinoid sprays in the garden such as imadocloprid and lobby your MP to put pressure on the government to bring back the ban. 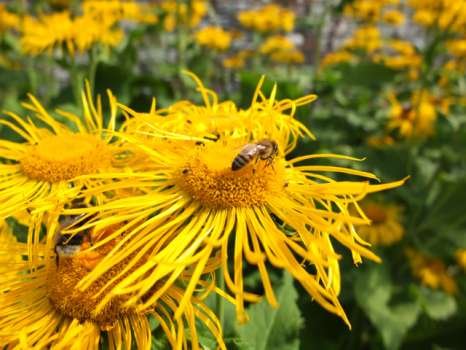